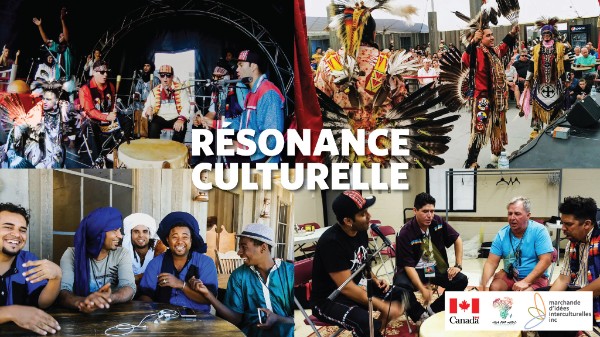 This short-film offers a real sense of celebration and shows that through intercultural exchanges we can strengthen the cultural ties between Canada and Morocco.

Toronto, Ontario, October 16, 2018 — Marchande d’idées interculturelles (MDI), with the support of the Embassy of Canada to Morocco, will present for the first time the premiere of the short film Résonance culturelle at the 5th edition of Visa For Music which will take place from November 21 to 24, 2018 in Rabat, Morocco.

The 13-minute short film produced by MDI will take the audience to the heart of the musical residency between RedTail Spirit Singers (Canada), Daraa Tribes (Official Selection of VFM 2017/Morocco) and Sacred Wolf Singers (Canada). The short film offers a real sense of celebration while constituting a visual legacy of the cultural richness of each group. This intercultural exchange is a living testimony of the benefits of these collaborations and contributes to the strengthening of cultural ties between Canada and Morocco.

The production also includes footage of Daraa Tribes’ visit to Montreal and the three groups performing at the Small World Music Festival at Toronto’s Harbourfront.

For the premiere of her short film, Nathalie Lévesque will be accompanied by Canadian musicians Wishe Tremblay, Akawui Riquelme-Catalan, Simon Denizart, Ivan Cloud (Tee Cloud) and dancer Jason Gallo. The presentation will be followed by a brief performance at the big drum and a question and answer session with the audience.

For details on programming, see Visa for Music and our Facebook page.

I am really proud to present the result of the collaboration between Canada and Morocco at the 5th edition of Visa for Music, a music market that brings together music professionals from Morocco, the Middle East and all over the world. It is thanks to the openness and the development of these exchanges that we can really enrich each other.

We are very happy to be able to support the premiere of the short film Résonance culturelle in Morocco, which will be screened as part of the Visa for Music festival. These successful intercultural meetings between Morocco and Canada reflect the growing dynamism of our exchanges in the cultural field, and we will strive to strengthen them even more.